COVID guidance has changed. Mask wearing is no longer compulsory for staff or patients, except in certain circumstances, in which case you will be informed. It is now your choice if you choose to wear a mask.

We expect everyone to wash hands properly, to ‘catch it, bin it, kill it’ when it comes to coughs and sneezes, and to stay home if they feel unwell. If you are worried about your infection status, or you are feeling unwell, please let us know and do not attend. You can reschedule your appointment.

Keep us informed – help us to protect our patients and our staff. Find out more here >

Tendons – what are they?

Tendons are tough bands of tissue made from collagen. They connect a muscle to a bone to bring about movement. As a muscle contracts, it shortens pulling on the tendon which, in turn, brings about movement of the bone.

In recent years there has been a lot of research into Tendinopathy and there is now a general consensus on some particular aspects. Firstly, Tendinopathic (pathological) tendons look different when looked at on an Ultrasound in comparison to normal tendons. Pathological tendons are thicker than normal tendons. Pathological tendons also have pockets of degenerative or ‘bad’ areas (Docking & Cook, 2016). The diagram below illustrates this:

While this may sound negative, it is not. The work by Docking and Cook in 2016 showed that while pathological tendons have pockets of degeneration (illustrated in red), they actually have healthier tendon than non-pathological tendons.

There are two myths that seem to surround tendinopathy:

The two presentations of Tendinopathy

Let us look at two scenarios where tendons can become painful

Tendon pain after a change in ‘loading’ or activity. It could be an elite athlete that works too hard after a break, or an average person who tries a new sport, such as high intensity interval training. It could even be someone who isn’t usually very active who decides to decorate the house!

This is called reactive Tendinopathy, and it can affect anyone who has had a significant change to their loading levels in a short period of time.

Long standing or recurrent Tendinopathy. This is where the tendon has more prominent thickening and are easier to provoke. There is, however more than enough good tendon to strengthen them and improve the levels of pain and function.

The best way to treat Tendinopathy is exercise! Here are some key things to remember - 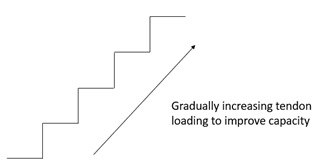 Some people think complete rest will help Tendinopathy, it won’t! Tendons rely on continuous loading to maintain their structure. Completely resting a tendon may reduce its capacity, making it worse rather than better.

Injections – are they good?

While we know steroid injections can be effective in the management of Tendinopathy in the short term they are generally not advised. There is evidence to suggest that steroid injections have negative effects on tendon cells which contributes to the problem as it effectively further reduces the tendon load capacity.

Tendinopathy can affect anyone regardless of their age, gender, fitness level or general health. In the majority of cases there are structural changes which can be seen on an ultrasound. However, those with Tendinopathy have more than enough ‘good’, healthy tendon to strengthen. Evidence has shown that generally, a period of progressive exercise is the best way to improve Tendinopathy.